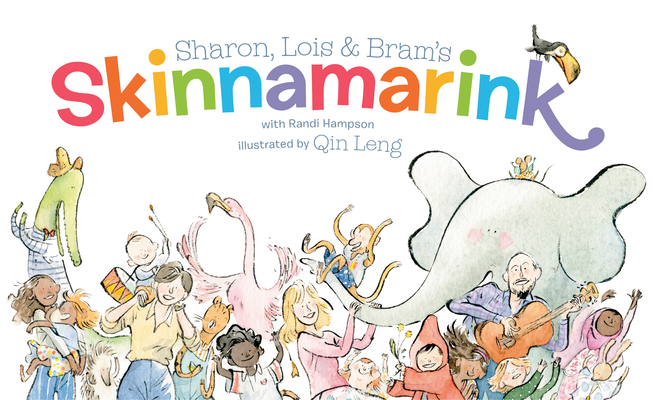 National bestseller — Based on the classic folk song made famous by a beloved trio of children's entertainers, this board book is best sung aloud! "Skinnamarink" is a timeless anthem of love and inclusion.

What does "skinnamarink" mean? You may not find its definition in a dictionary, but the meaning is clear to the generations of children who sang along: friendship, happiness, sharing, community and, ultimately, love. This song has been sung in weddings and in classrooms. It can be fun and silly — especially with the accompanying actions! And it has a way of bringing people together. Through Qin Leng's wonderfully imaginative illustrations, this delightful board book tells the story of a community coming together. Young and old, from little mice to a big elephant, people and animals gather into a spontaneous parade as they follow the sound of music.

Sharon, Lois and Bram formed as a trio of children's entertainers in Toronto in 1978 and went on to create two top-rated children's television shows, most notably The Elephant Show, and to release 21 full-length albums (many of which reached gold, platinum, double platinum and triple platinum). In 2018, Sharon and Bram celebrated their 40th anniversary and they continue to entertain children and share their message of love.

SHARON HAMPSON, the late LOIS LILIENSTEIN (d. 2015) and BRAM MORRISON are some of Canada's most famous children's performers, with fans across North America and around the world. The trio, known simply as Sharon, Lois and Bram, formed in Toronto in 1978 and went on to create two top-rated children's television shows, The Elephant Show (CBC/Nickelodeon, 1984-88) and Skinnamarink TV (CBC/TLC, 1997-98), and to release 21 full-length albums (many of which reached gold, platinum, double platinum and triple platinum). They have won countless awards and were appointed to the Order of Canada in 2002. In 1998 they performed at the UN General Assembly and in 1994 they performed at the White House Annual Easter Egg Roll and Hunt. They also performed a run at the renowned Palace Theater on Broadway. Most recently Sharon and Bram were invited to participate in Toronto's 2017 Pride parade -- parade goers were so moved to see them participate that the crowd broke into a spontaneous version of the song along the parade's route.

Throughout her career, QIN LENG has illustrated picture books, magazines and book covers with publishers around the world. Recent picture books include her author/illustrator debut I Am Small (to be published in fall 2018); Ordinary, Extraordinary Jane Austen by Deborah Hopkinson; and Family Is a Family Is a Family written by Sara O'Leary. Hana Hashimoto, Sixth Violin, written by Chieri Uegaki, was a finalist for the Governor General's Literary Award, and received the APALA Award for best picture book. She lives in Toronto, with her husband and her son.

"A lighthearted frolic ready for a rousing singalong." —Kirkus Reviews

"A joyful sing-aloud book that will have readers humming its tune long after its covers are closed." —Publishers Weekly

“Skinnamarink is a superb avenue for sharing the concept and message of love created by these three very memorable children’s entertainers. It will be hard for readers to just ‘read’ the words and not want to break out in song.” —Resource Links

“Children of all backgrounds are included in this story, making it a real life, digestible and beautiful book for families everywhere.” —TheBabySpot.ca