The Art of WolfWalkers (Hardcover) 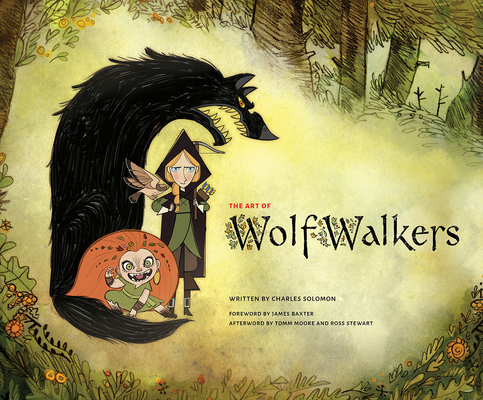 Cartoon Saloon, the Irish animation studio behind the Academy Award–nominated films The Secret of Kells (2009), Song of the Sea (2014), and The Breadwinner (2017), and their co-producer Melusine Productions, returns in 2020 with their latest feature, WolfWalkers, directed by Tomm Moore and Ross Stewart. To be released later this year theatrically, followed by streaming on Apple TV+, this mythic tale tells the story of a young hunter named Robyn, and her unlikely friendship with a wild girl living among wolves. Filled with exclusive hand-drawn sketches, paintings, interviews, and digital renderings that showcase Cartoon Saloon’s unique artistic style, The Art of WolfWalkers takes fans behind the scenes of one of animation’s most celebrated studios.

Through exclusive commentary and interviews with cast and crew, renowned animation critic and historian Charles Solomon showcases the craft and skill behind some of the most lovingly detailed and imaginative 2-D animation currently being produced. Featuring a foreword by award-winning animator James Baxter and an afterword by Cartoon Saloon cofounder and codirector of WolfWalkers Tomm Moore and codirector Ross Stewart, The Art of WolfWalkers is a must-have for animation fans everywhere.

Charles Solomon is the author of more than a dozen books on the art and making of animated films and television specials. His recent credits include The Art of WolfWalkers (Abrams, 2020), The Art of Toy Story 3, The Art and Making of Peanuts Animation, The Art of Frozen, and the Song of the Sea Artbook, which he wrote in collaboration with Cartoon Saloon cofounder Tomm Moore. Solomon lives in Los Angeles.

“It’s the next best thing to running away to the ancient Irish woods with your own wolf pack.”
— Animation Magazine

“The book, written by legendary animation historian Charles Solomon, is the perfect companion to the film and allows you to luxuriate in the artistry and craftsmanship of Tomm Moore and Ross Stewart‘s miraculous film.”
— Collider

“The Art of Wolfwalkers is an elaborate study by animation historian Charles Solomon, who likens the movie to the work of Disney’s old masters.”