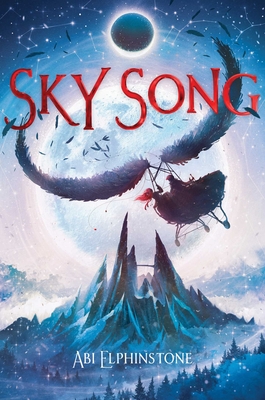 “The Ice Queen is collecting voices in order to perform some big, sure-to-be-devastating magic, and as her prisoner, Eska knows she has to keep her own voice out of the Ice Queen’s hands. When inventor Flint happens to show up while Eska is escaping, she convinces him to help her. Thus starts many journeys — a journey to get help from other people in the kingdom to defeat the Ice Queen, a journey to friendship, and a personal journey for both Eska and Flint as they decide who they want to be. A good, magical story about hope, bravery, and friendship in the face of loss and despair.”
— Melissa Oates, Fiction Addiction, Greenville, SC

“A thrillingly wild adventure.” —Jonathan Stroud, author of the Lockwood and Co. and Bartimaeus series

A cursed girl and a young inventor join forces to search for an ancient, forgotten song with the power to bring down a wicked Queen in this epic fantasy adventure perfect for fans of The Girl Who Drank the Moon and Furthermore.

The snowy kingdom of Erkenwald was once a magical place—until an evil ice witch cursed the land and began stealing the voices of the kingdom’s people to increase her powers.

Eska is one of the many prisoners of the Ice Queen. With no memories of her past, Eska only knows that she cannot allow the Ice Queen to take her voice, that it might be special in some way...

When young inventor Flint sneaks into the Ice Queen’s palace in an attempt to rescue his mother, he ends up rescuing Eska instead. Together, Flint and Eska must journey to the Never Cliffs and beyond in search of an ancient, long-forgotten song with the power to end the Ice Queen’s reign and return voice back to the people of Erkenwald.

This is the story of an eagle huntress, a boy inventor, and a wicked queen in a castle made from ice. But it’s also a story about finding a place to belong, even at the farthest reaches of the world.

Abi Elphinstone grew up in Scotland where she spent most of her childhood building dens, hiding in tree houses, and running wild across highland glens. After being coaxed out of her treehouse, she studied English at Bristol University and then worked as a teacher in Africa, Berkshire, and London. She is the author of the Dreamsnatcher trilogy and the Unmapped Chronicles, among other books for young readers, and the editor of anthology Winter Magic. When she’s not writing, Abi volunteers for the children’s literacy charity Coram Beanstalk, speaks in schools, and travels the world looking for her next story. You can find more about Abi at AbiElphinstone.com or on Facebook at Facebook.com/Abi.Elphinstone.