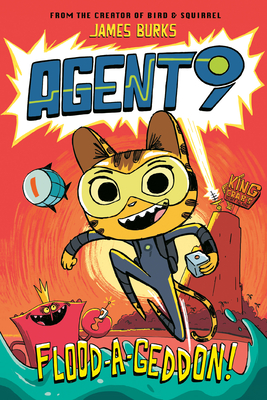 From the creator of Bird & Squirrel, comes this hilarious and adventurous new graphic novel series about a feline secret agent who will do whatever it takes to save the world—even if it means destroying a few things along the way.

The Super-Secret Spy Service's mission is to keep the world safe from maniacal villains. And Agent 9 is one of its best operatives. Although Nine always manages to complete the mission, there is occasionally some collateral damage (like the priceless Pigasso painting that was destroyed while foiling an art heist). So Agent 9 is now on probation.

But when bumbling supervillain King Crab manages to overtake S4 headquarters, there is no one else to turn to. Nine—along with a robotic partner named FiN—is all that stands between King Crab and his diabolical plans to melt the polar ice caps and build a massive water park. Can Agent 9 prove to be the right cat for the job by overcoming impulsive behavior and saving the world from a complete flood-a-geddon?

James Burks is a master of disguise. He's spent over twenty years working undercover in the animation industry on movies and television shows, including Bravest Warriors, Space Jam, Treasure Planet, The Emperor's New Groove, and The Iron Giant. He's also the mastermind behind the popular Bird and Squirrel graphic novel series. He lives with his family in a secret base hidden on an ordinary street somewhere in Southern California. You can visit him at www.jamesburks.com.

"Agent 9 is a fast paced adventure with a slick visual style and great humor all wrapped into one!" —Dan Santat, Caldecott Medalist and New York Times bestselling creator of The Adventures of Beekle

"Every kid will see themselves in this feisty, mischievous cat. Action, adventure, and plenty of laughs in this well-crafted, super fun world." —LeUyen Pham, Caldecott Honoree and New York Times bestselling co-creator of Real Friends and the Princess in Black series

"Agent 9 bolts, bounds, and--more often--explodes through every hilarious page in this welcome new addition to the spy genre. Burks is at the height of his creative prowess." —Mike Maihack, creator of the Cleopatra in Space series

“A delightful graphic romp. With a blend of thrilling chase scenes and a generous helping of humor, this crowd pleaser should be catnip to fans of series like Aaron Blabey’s The Bad Guys. Spy aficionados will find this purr-fect.” —Kirkus Reviews

"Sure to make readers gasp and giggle. While escapes, explosions, and scribbly, jewel-toned art will no doubt draw in younger readers, Burks’ dry humor will also keep a more sophisticated crowd engaged and chuckling. Readers will be sure to keep an eye out for 9’s next adventure, but they’ll definitely want to give this first romp a few rereads in the meantime" —BCCB

"Burks delivers an endearing tale about a secret agent character a la James Bond, but much zanier. Fans of Burks’ Bird & Squirrel series will gobble up this new offering. [It] will elicit chuckles from young and old readers alike." —School Library Connection

"Hooray, for Agent 9! This is a good old-fashioned spy thriller but with a hero that has a lot of learning to do. And you can believe that this cat may scratch and claw its way into your top picks." —Elizabeth Bird, Fuse 8, an SLJ Blog