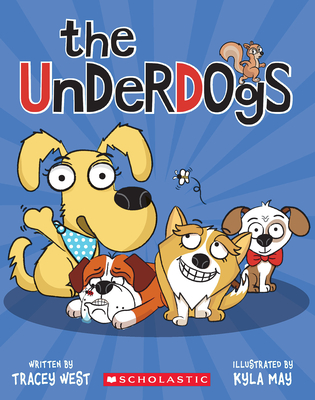 Welcome to the town of Barksdale, where the canine residents strive for perfection. Every shopkeeper claims to be the "best groomer" or sell the "best biscuits." And at Barksdale Academy, the pressure is on every year for one pup to be named Best in Show.

Nova, Duke, Harley, and Peanut have never won Best in Show... which is okay with them! But they have to work together to pass their Agility Exam, because either the whole pack passes or the whole pack fails.

Nova has convinced her pals to train, but on her practice course, Duke is afraid to climb the high ramp, Harley keeps chasing squirrels, and Peanut can't make it through the hoops. Nova's not doing much better -- she's so excited she keeps knocking the whole course over!

Will the pups make the grade, or are they doomed to be Underdogs forever?

With black-and-white illustrations on every page and hilarious antics throughout, this series is perfect for readers who are just starting to read chapter books on their own, or for anyone who loves a good underdog story!

Kyla May is an Australian illustrator, writer, and designer. She is the creator and illustrator of two early chapter book series: Lotus Lane (Chemin du Lotus) and Diary of a Pug (Journal d’un carlin). She is also the illustrator of The Sloth Life and The Underdogs series. In addition to books, Kyla creates animation. She lives by the beach in Victoria, Australia, with her three daughters.

Tracey West is the author of the New York Times bestselling series Dragon Masters, for Scholastic Branches. She has written more than 400 books for children, including the Underdogs series, illustrated by Kyla May; the Pixie Tricks series, illustrated by Xavier Bonet, and the perennially popular Pokémon chapter books. She lives with her husband, adopted dogs, and chickens in the western Catskill mountains of New York State.